Com
Complete results can be seen at
https://docs.google.com/spreadsheets/d/1UOutnK4BuuSRhtnJA0zaetAfdU7ACQbHpyddqk4dO7o/pubhtml

Many more photos can be seen at jnyyz.wordpress.com, the blog of Jun Nogami, faculty adviser to the University of Toronto HPV team.  Scroll down to entries for June 23, 24 and 25. 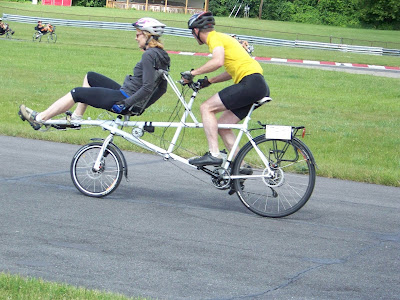 Mark and Sally Archibald, riding a tandem that Mark built,  were the only competitors in the multi-rider class, but still competed in all the events for HPRA points, plus the urban transportation contest.   Mark is a professor of mechanical engineering at Grove City College and adviser to its HPV team.

Text and photos by Mike Eliasohn

The 33rd annual Michigan Human Powered Vehicle Rally June 24-25– the 30th at the Waterford Hills sports car racing track in Clarkston – drew a big turnout, despite several regulars being absent.
There were 40 competitors, coming from as far as Massachusetts, Tennessee and Iowa, as well as Michigan and nearby states, plus Ontario.
First-time competitor Mike Denninger drove about 810 miles from Bedford, Mass., which Ishtey Amminger and his father, Peter, drove slightly farther, from Memphis, Tenn. And since Ishtey is 14, Peter did the driving.
The youngest (and first-time) competitor was Conor Moorhead, 11, of Terre Haute, Ind., while the oldest was long-time competitor Rich Myers, 80, of Xenia, Ohio.
The University of Toronto was back for the eighth year with 10 riders, four streamliners (one of them a “camera bike” they only brought for testing) and two manufactured low-racers. 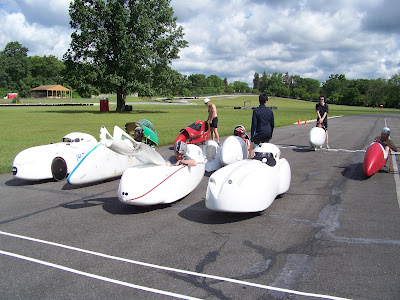 Grove City College, from Grove City, Pa., was at the rally for the first time, with eight people – four students, two recent graduates and HPV team adviser and professor of mechanical engineering Mark Archibald and his wife, Sally. Two students competed on student-built bikes; one recent grad competed on his own (upright) bikes; and the Archibalds competed on the tandem Mark built several years ago.
Mark said GCC has had an HPV team for “probably” 12 years. “We built a few bikes before we raced anywhere,” at American Society of Mechanical Engineers HPV competitions and elsewhere. 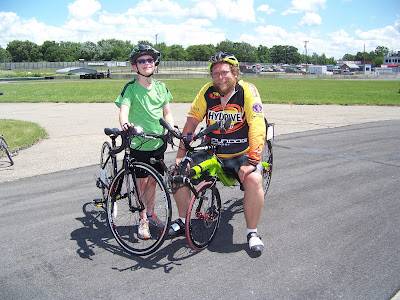 Michael Moorhead, riding a Performer, and son Conor, on a Motobecane Mirage, came from Terre Haute, Ind. At 11, Conor was the youngest competitor.  Michael is an associate professor of mechanical engineering at Rose-Hulman Institute of Technology and adviser to its HPV team, which won the American Society of Mechanical Engineers HPV competition in April with a leaning tricycle.  With students doing summer internships all over, it's difficult to get them together to participate at the Michigan HPV Rally or other events, he said. 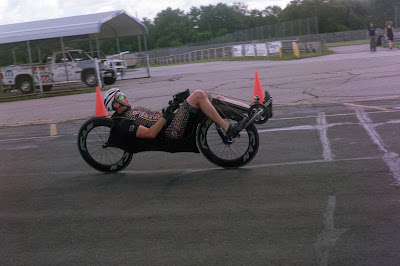 As usual, Dennis Grelk of Donnellson, Iowa, was a very busy competitor.  He won the stock class on this low racer that he built; finished second in the streamliner class in his Barracuda (built by Warren Beauchamp); and also raced a Hase Kettwiesel in the tricycle class. 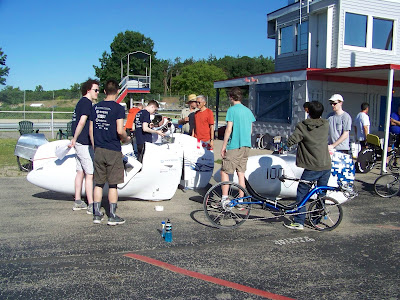 The University of Toronto HPV team, at the rally for the eighth straight year, came with 10 people, four student-built streamliners (one of them for testing only) and two manufactured recumbent bikes. Team adviser Jun Nogami, professor and chairman of the Department of Materials Science and Engineering, is in the orange shirt. 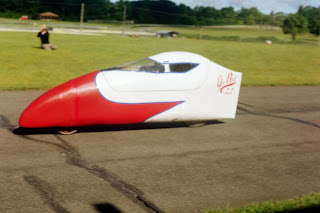 At age 80, Rich Myers of Xenia, Ohio, was the oldest competitor.  He was racing a MiniMoby streamliner built many years ago by Terry Hreno. 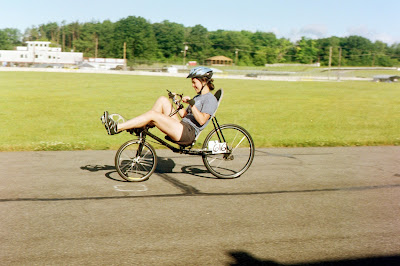 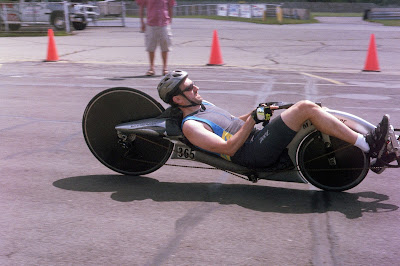 Mike Mowett of Detroit raced his John Morciglio-built M1 low racer to 6th in the stock class, then for fun also raced his Cervelo (below) in the 200-foot flying start sprints.  In that event, he went 38.76 mph on the M1.  On the Cervelo, his speed was about 32.5 mph. 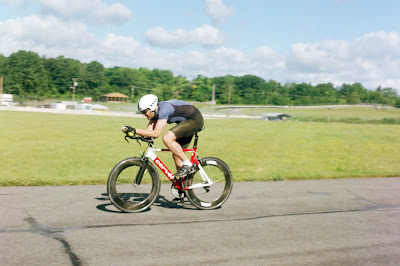 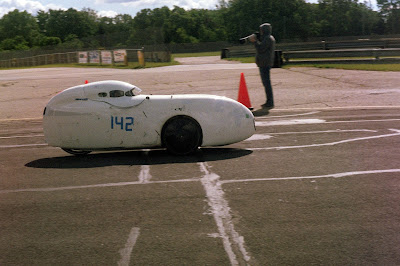 Ted Peer and his wife, Jill, drove from Ankeny, Iowa (about 1,200 miles round-trip) with his DF velomobile, made in the Netherlands. He finished second in the streetliner class.  Purchased in December 2015, he commutes to work in it, 25 miles there and 30 miles returning home. "I average 15 mph when I'm going to work," he said, which takes him about 1 hour and 45 minutes.
Posted by Michigan Human Powered Vehicle Association at 3:22 PM