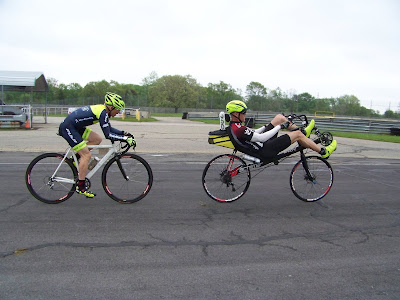 Words and photos (except one) by Mike Eliasohn

Despite threatening weather, the 34th annual Michigan Human Powered Vehicle Rally May 19-20 – the 31st at the Waterford Hills sports car racing track in Clarkston – drew 31 competitors.
Saturday morning started wet, and depending on the forecast, there was the possibility of rain all day, which may have kept some competitors and spectators away. Because it was too wet to tape the timing tape to the pavement for the two one-hour time trials, which were the scheduled first events, competition started with the hill climb-coast down. By the time that was over, the track had dried enough to put down the timing tape, so the one-hour for mostly streamlners started at about 11:30 and the time trial for the other vehicles started at 1:05.
That was followed by the hot laps, but because everything was running late, the standing start kilometer, the final event scheduled Saturday, was cancelled.   Good thing, since it started raining as people were leaving and then it started pouring.
On Sunday, It was cloudy all morning, but no rain, so all events were held as scheduled, and ran quick enough that the awards ceremony was done by about 12:40.
Tedd and Donna Wheeler of Reed City organized and ran the rally for the second time. Other helpers included Bruce Gordon of Buchanan, who handled the online registration, ran the timing equipment and compiled and posted the results and Mike Mowett of Detroit, who did the technical inspections. (Note: Bruce plans to retire from his timing/compiling results duties, so someone needs to volunteer to take over, or there might not be a 35th Michigan HPV Rally.)
Apologies to any other helpers we missed. 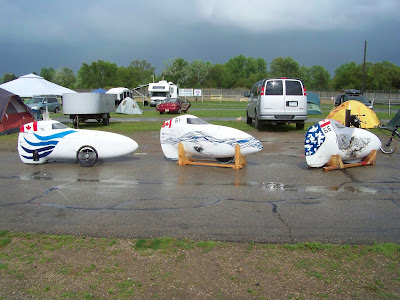 The University of Toronto – the only college team competing – was back for the ninth year with three streamliners, two manufactured recumbents, five riders and some parents.
Special mention also should be made to Dennis Grelk, who once again made the long trek from Donnellson, Iowa, with his parents, and five HPVs, three of which he built. He competed with four of them.
And, Michael and Linnae Hinterseher of Novi and their three children – Elizabeth, 8, Amalie, 11, and Johannes, 12 – all participated.
Following are the top three for each class. To see complete results, go to recumbents.com, click on “recumbent racing,” then “HPRA racing results and pictures,” then under “2018 HPV racing results and pictures,” “Michigan HPRA racing results.”   Photos by Tony Levand can be seen at https://www.flickr.com/photos/26437850@N02/albums/72157695343772941 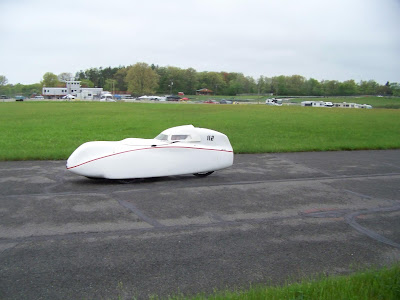 Michael Hinterseher of Novi won the streetliner class in his Milan SL three-wheel velomobile.  He's shown here in the 200-foot flying start sprint on Sunday, in which his speed was 41.15 mph – very impressive for a vehicle designed for riding on the street. He was faster than all but one of the strictly-for-speed streamliners.


Daryl Hanger, shown here during Saturday's one-hour time trial, cruised to first place in the stock class on his Cruzbike.  In the one-hour, he finished second, riding 18 laps at an average speed of 24.094 mph. 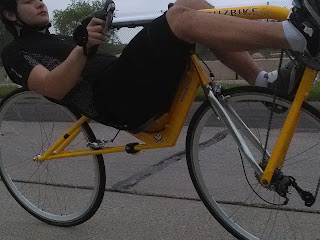 Ishtey Amminger of Memphis, Tenn., on his Cruzbike won the junior class for the third straight year.  At 15, it's his last year in the junior class.  Next year, he competes with the adults.  (Tony Levand photo) 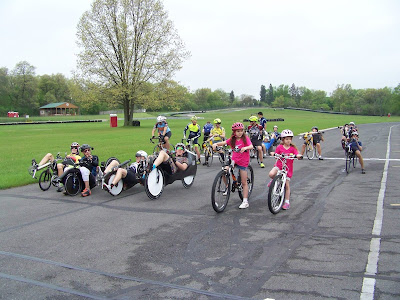 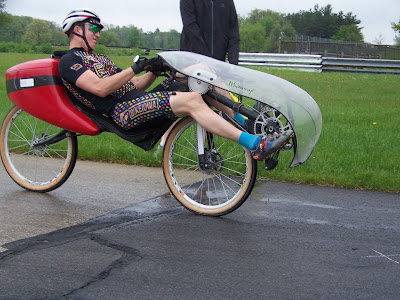 Urban transportation contest: There were four competitors. Scores were based on: 1) Evaluation for such features as lights, rearview mirrors, fenders and other “weather protection” features, cargo carrying capacity, carrying a lock and visibility; 2-3) finishing position in the hill climb and coast down and 4) time in the obstacle course, which tested maneuverability, speed and braking.
Darryl Hanger, Catrike 700 (with smaller rear wheel), 14 points; 2) Dennis Grelk, homebuilt front-wheel-drive recumbent built (mostly) for riding on gravel and for training, 13, 3) Johannes Hinterseher, age 12, Trident folding tricycle, 7, 4) Linnae Hinterseher (Johannes’ mother), Quattro Velo 4-wheel velomobile, 5.
Although Linnae finished fourth, it should be noted that she did not compete in the hill climb-coast down and in the evaluation, her Quattro Velo was far ahead of the other competitors. It scored points for every category except “convenience (size, getting on/in – off/out).” It’s only other negative was she had extreme difficulty making it around the tight turn in the obstacle course.
Mike Eliasohn ran the event, with assistance from Charles Brown. 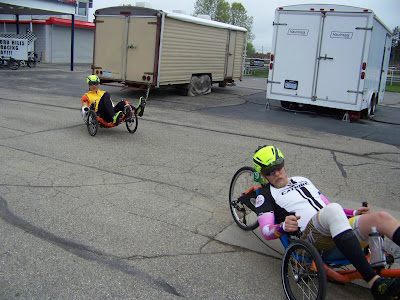 The tricycle race on roads in the pit area, with many corners, was an exciting duel between Jonathan Walters and Daryl Hanger.  In this photo, Daryl is leading, but at the end, Jonathan was the winner.  He rode a Catrike Speed, while Daryl was on a Catrike 700 (with smaller rear wheel).  Five trikes were in the race. 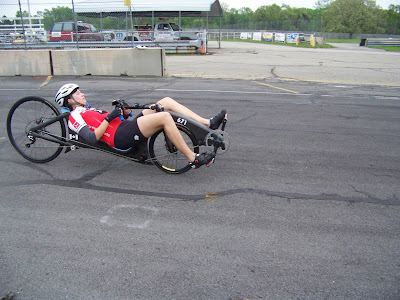 Amanda Zolyniak was, unfortunately, the lone competitor in the women's class, competing on the Raptor carbon fiber low racer built by her and husband Dan, 180. She's faster than many male competitors, for instance, 31.57 mph in the 200-foot flying start sprint. 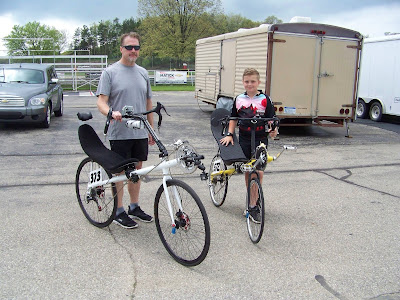 Rob Lloyd of Whitmore Lake and his son, Cameron, 11, both competed on Rans bikes, which Rob modified.  He replaced the 650 size wheels on his F5 Pro with larger 700c. which required slight frame and fork modification, plus he mounted a disk brake on the front.  Cameron's Enduro came with 26 inch wheels, which his father replaced with smaller 520 size (approximately 24-inch). Rob also had to make other modifications and added disk brakes front and rear. 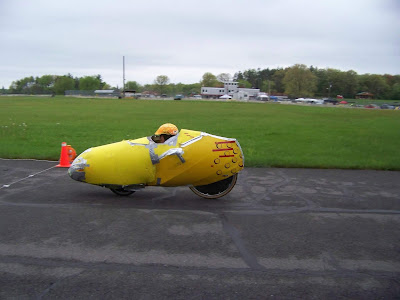 Tony Levand, who finished second in the streamliner class, somehow squeezes himself and his cycle inside the small fairing.  It has a 48-inch wheelbase, 20x1.6 front wheel/tire and 700x38 rear.  It's front wheel drive. From April 16 to May 8 of this year, he rode his homebuilt creation 1,106 miles (1,780 km) on a tour.  To read about his adventures, and to see what the bike looks like without the fairing, go to
https://www.crazyguyonabike.com/doc/?o=1o0&doc_id=20664&v=Hb

A record and not a record

Calvin Moes' 45.42 mph in the 200-foot flying start sprint led me (Mike E.) to ask Mike Mowett, who keeps track of such things, whether that was the fastest speed ever at Waterford Hills.  Here's Mike's reply:
Calvin's time was certainly very quick indeed, but Todd Reichert does still hold the track record with a 48.02 mph run in Vortex back in 2011. The year prior he had reached 47.0 mph in their first streamliner A.C.E,. breaking Rick Gritters track record of 45.91 mph set in 2006 in his Dacron liner.
(Note from Mike E.:  Todd's fast times at Waterford Hills were in University of Toronto streamliners.  He now holds the world record, 89.54 mph/144.17 kph set at the World Human Power Speed Challenge at Battle Mountain, Nev., in 2016,)
Calvin's run is likely in the top 10 of all time at Waterford Hills. Calvin is the ninth fastest human using pedal power,  based on his legal runs of 79.2 mph last year at Battle Mountain in Eta Prime, while winning the event.
Note: Dennis Grelk expressed some disappointment to me that he couldn't get Frank Geyer's 27.66 mph stock record (in the one-hour time trial) set on his Challenge Jester way back in 2004. That still remains a formidable mark that Frank set in 20 laps of the track.
Note: Rick Toler's 17 second hill climb on his upright bike is a new overall hill climb record, beating Sean Costin's 18 second mark. Rick rides a lot of time trials in Ohio with Thom Ollinger and this was at least his second HPRA race (but his first at Waterford Hills). I know he raced at Ohio in 2011, a race at which I fell and Warren Beauchamp had Rick drafting him the whole hour, which he recorded on film.

The complete history of the track records are here.
http://www.wisil.recumbents.com/hpra/hpra_track_records.htm