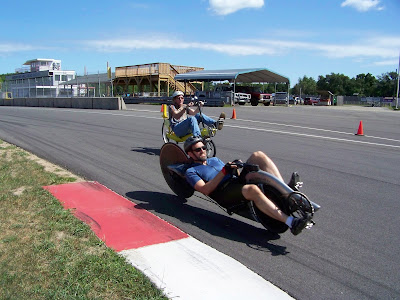 The 35th annual Michigan HPV Rally took place Aug. 10-11, 2019, at the Waterford Hills sports car racing track in Clarkson, the location every year since 1986.
There were only 24 entries, down from 31 last year.  Human Powered Race America events in North Manchester, Ind., and Northbrook-Kenosha also had lower turnouts than past years. (In comparison, at the 2016 rally, there were 37 competitors and 41 HPVs.)
Among the missing were the University of Toronto, which last year had three streamliners, two manufactured recumbents and five riders at the rally, and a few regulars, so hopefully next year we will have more competitors.
The consensus was there will be a 36th annual rally next year, despite the decision of Tedd and Donna Wheeler of Reed City that this would be their third and final year as rally organizers and Bruce Gordon of Buchanan that after several years of doing the timing and scoring, this would be his final time.
So thank you Tedd, Donna and Bruce.  Help will be needed to organize and run the 2020 rally. Hopefully there will be a date available on the Waterford Hills schedule so we can return the rally to May or June.
To celebrate our 35th, a barbecue was planned for Saturday evening at the track, but it had to be cancelled a couple of days prior. But thanks to competitor Dave Johnson of Olivet and his wife, Andrea Funk, owner of www.TooCoolTshirtQuilts.com, for buying pizza and soft drinks for that evening. (Free plug = free food.)
Two scheduled events, standing start kilometer on Saturday and tricycle race on Sunday, were not held.
Here's the top three in each class:
Streamliner (4 entrants): 1) Dan Zolyniak, Toronto, Ontario, Mistral streamliner built by him and his wife, Amanda, 350 points; 2) Dennis Grelk, Donnellson, Iowa, Barracuda streamliner built by Warren Beauchamp, 330; 3) John Simon, Portland, Moby streamliner built by Terry Hreno, 310.
Streetliner (4):  1) Tony Levand, Lemont, Ill., homebuilt two-wheeler, 340; 2) Jeff Hunn, North Manchester, Ind. velomobile, 315; 3) Eric Winn, Brighton, Blue Velo Strada velomobile, 290. 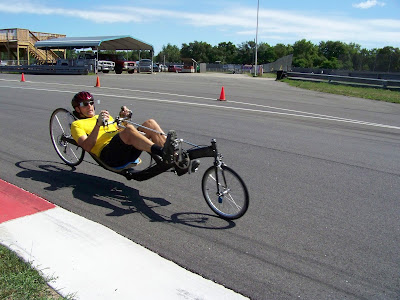 Great White was suffering from indigestion, so Dave Johnson left the streamliner's fairing at home in Olivet and raced the bare carbon fiber bike built by Rick Wianecki in the stock class. He finished third overall . 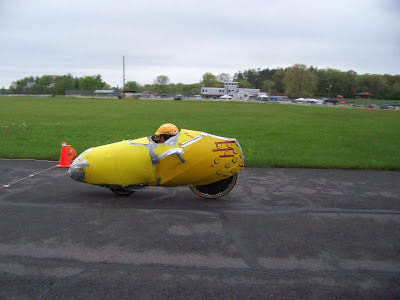 Tony Levand of Lemont, Ill., won the streetliner class in his homebuilt machine.  Somehow the fairing has room for Tony, a 20-inch front wheel and 700c rear. It's front wheel drive.  (Photo from 2018.) 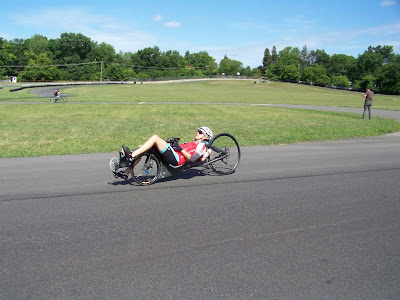 For the second year in a row, Amanda Zolyniak of Toronto was the lone competitor in the women's class.  She's shown here during the Sunday morning road race. She completed 18 of the 20 laps at an average speed of 19.963 mph.  She and husband, Dan, built her carbon fiber Raptor low racer. 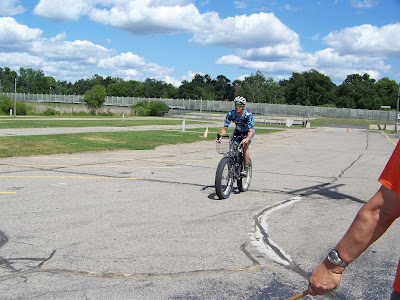 In the urban transportation contest, Dennis Grelk approaches the end of the obstacle course, where the goal was to stop quickly and smoothly.  With his Surly Pugsley fat bike, shown here, plus his streamliner and stock class low racer, Dennis was the only competitor taking part in every event. And after the rally was over, he and his mother, Mary, drove more than 500 miles home to Donnellson, Iowa.

1) Joe Solecki, Royal Oak, Schlitter Encore high racer, 26 points, 2) Tim Potter, Okemos, 1983 Nishiki Seral upright bike, 23 points; and 3) Dennis Grelk, Surly Pugsley upright fat bike, 21 points.
Although Joe's very laid back high racer is not the kind of bike one would think of for "practical" riding, of the seven UTC competitors, he scored first in the hill climb and coast down and second on the obstacle course.
His bike lacked fenders and a horn or bell, but had lights front and rear, reflectors, bags big enough to carry two bags of groceries (he said he sometimes uses the bike for shopping runs), a lock, tools, tire pump and inner tube or patch kit.
Tim uses his bike for his daily 6-mile commute to his job as manager of MSU Bikes, the on-campus bicycle shop.  The evaluation score for his bike was 18 points; Joe had 17, but outscored Tim in the hill climb, coast down and obstacle course. 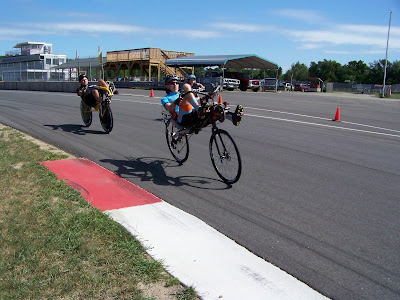 In the one-hour time trial Saturday morning, Joe Solecki of Royal Oak on his Schlitter Encore leads Ishtey Amminger of Memphis, Tenn., on his Cruzbike. Joe finished 4th in the event; Ishtey was 5th. 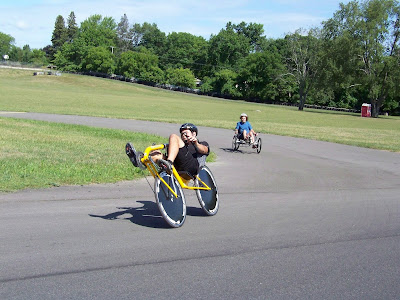 Another view of Ishtey, on his front-wheel-drive, moving bottom bracket Cruzbike. Behind him during Sunday morning's 12-mile road race.  Behind him is Johannes Hinterseher on a Trident.  Ishtey finished second in the stock class in this event; Johannes was first in the junior class.

Except for the hill climb/coast down.  Those results here:
http://www.recumbents.com/wisil/racing2019/waterford2019_hpra_results.htm 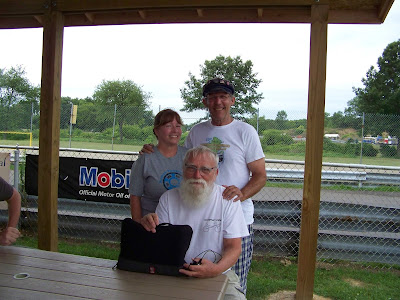 Tedd (standing) and Donna Wheeler of Reed City decided the 35th Michigan HPV Rally would be their last as organizers and Bruce Gordon of Buchanan would be his last doing the scoring and timing.  Thank you Tedd, Donna and Bruce. But others will need to step up to keep our event going. 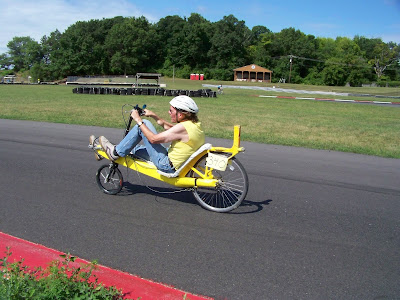 Charles Brown on his homebuilt wood frame bike.  He built the bike from poplar wood in 2002, when living in Florida. "I was trying to build something that was easy to live with – with good steering, ride, comfortable rider position, etc., but it wasn't build for speed," he said in an email. But now that's back in the Detroit area, he's thinking about building a long wheelbase wood bike, which would better cope with the area's bumpy streets. 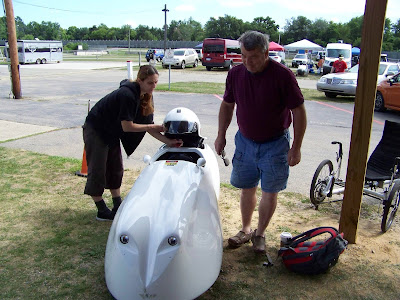 Glenn Gehrke of Davisburg, who races a car at Waterford Hills, stopped by on Aug. 10 to see if anything was going on and discovered the Michigan HPV Rally.  Here, Linnae Hinterseher, who did not compete, shows Glenn her QuattroVelo four-wheel velomobile. 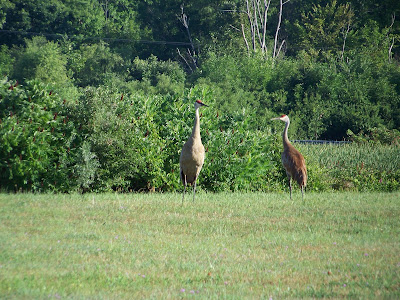 These two sandhill cranes were observers of Sunday morning's top speed event until they decided to take off, literally.  Unfortunately, I (Mike E.) wasn't able to photograph both cranes in flight.  (Thank you, Donna Wheeler, for knowing these were sandhill cranes.) 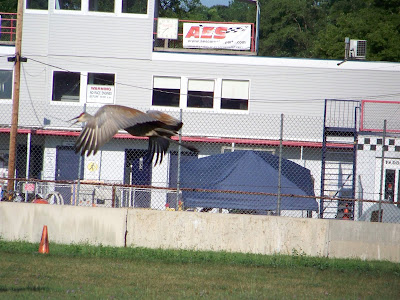 If you find things in this report that need correcting, or want to help with the Michigan HPV Rally in 2020, please contact mikethebike2325@comcast.net.

Posted by Michigan Human Powered Vehicle Association at 11:38 AM