Rick Toler of Dayton, Ohio, on his Hooker TT pursues (or drafts?) Ron Thompson of Bel Air, Md., on his innovative G4 front-wheel-drive bike.  Not sure which race. (Kevin Shaw photo)
Complete results are posted on recumbents.com, along with all of Kevin Shaw's photos. Go to "recumbent racing," then "HPRA racing results and pictures."
After a year of no events for human powered vehicle racers and enthusiasts, HPV racing resumed Aug. 21-22, 2021, with the Michigan HPV Rally at the Waterford Hills sports car racing track in Clarkston, the location since 1986.

The rally drew 20 competitors and 23 vehicles (Dennis Grelk and Daryl Hanger were the multi-vehicle competitors). Checking turnout since 2007 (from all the rallies reported on this blog), it was the lowest count since then; the next lowest was 24 in 2019. 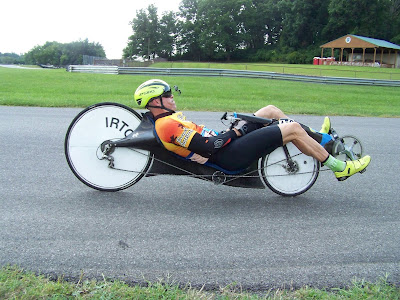 Jonathan Walters of Cincinnati on his Velokraft NoCom won the stock class. There were 13 competitors in the class. (Mike Eliasohn photo)

Was the low count because of continuing concern over COVID, the hot and humid weather during the weekend, a weekend with too many people having conflicts and/or  continuing declining interest in HPV racing?.  We will have to wait until the 37th annual Michigan HPV Rally in 2022 to find out

The announcement of the rally published on this blog in January said prize money would be awarded to the top finishers in each class. Unfortunately, because of the low turnout, there wasn't enough entry fee money collected to pay the track rental fee and for insurance and have money left over to pay prize money. That is, we lost money on renting the track and paying the insurance, so the organizers paid the difference. 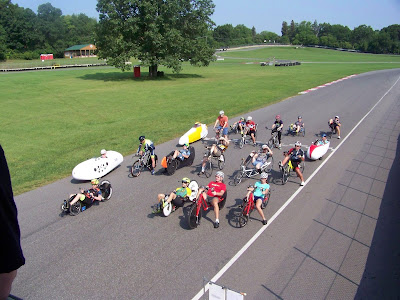 After a year of no HPV events, racing resumed with the start of the one-hour time trial on Saturday morning,  Two one-hour time trials were scheduled, with streamliners, streetliners and  tricycles scheduled in the first one and stock, junior, women and tandem classes scheduled in there other. But due to the low turnout, only one time trial was held for all classes. (ME photo)
Special mention needs to be made of the Grove City College HPV team, which came from Grove City, Pa., with five students (four of whom raced) and faculty adviser Kevin Shaw. 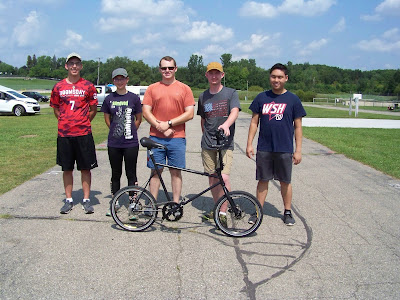 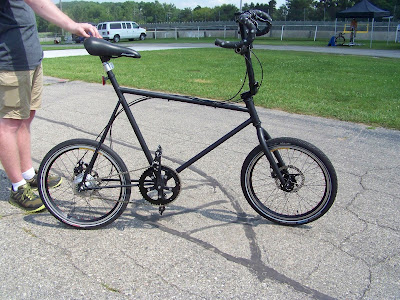 Due to a mechanical problem, the bicycle built by current Grove City College students was only used in the urban transportation contest, ridden by Alex Heisey.  Gina Kim welded the frame.  It used a Rohloff 14-speed hub, previously used on another vehicle. The GCC team also raced a recumbent tricycle built by prior students, a Tour Easy recumbent and two manufactured upright bikes.  (ME photo)
The reduced turnout also resulted in cancellation of the noontime hot laps and tricycle race on Saturday (it was hot enough without doing any "hot" laps) and the two no-hill road races scheduled Sunday morning (faired classes in one and unpaired in the other) were condensed into one race.
Special thanks to Mike Mowett and Dennis Grelk, who in addition to competing, handled most of the the scoring, timing and results.
Here's a note from Mike M., co-organizer of the rally along with Mike Eliasohn:
Thank you all for coming to this event, which we believe is the longest running human powered vehicle event in the world.
Special thanks to all who volunteered their time to help during the event, whether it was setting up something, taping something down, running the stopwatch, calling out stuff over the radio, flipping lap counter cards, waving a flag, or moving a table and chairs..  It takes a village.
Thank you for your patience as we worked through some glitches with our timing system for the Saturday morning one-hour.  Special thanks to Dennis Grelk for getting it running with a little bit of phone help from Warren Beauchamp, our long-time recumbents webmaster.  We didn't have the usual suspects there to run it.
All told, the one-hour will never be fully accurate. I did the best we could given our recollections, speedo distances, Strava GPS speeds, and "who was in front of whom" statements, etc. 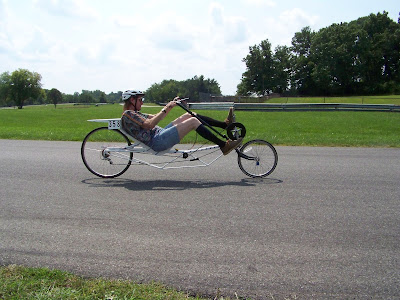 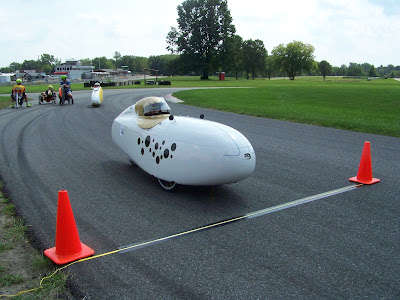 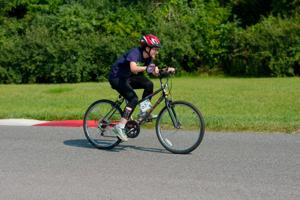 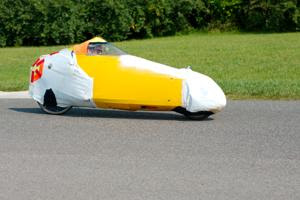 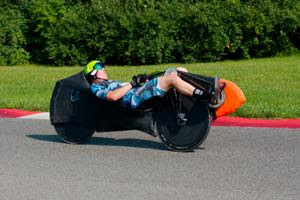 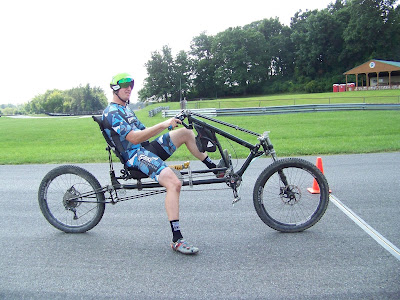 Dennis Grelk made hill climb runs in/on his streamliner, stock class bike and this off-roader/gravel bike he built. He only made one run on this bike to get a required time for the urban transportation contest. It has a lot of adjustability (for instance, front fork angle), which adds weight, so his goal for the next gravel bike he builds is to make it lighter.  (ME photo) 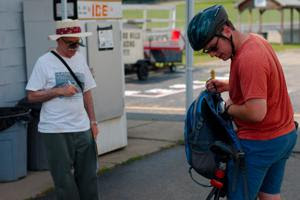 "How much groceries can you carry in that backpack?" Mike Eliasohn, judge and jury of the urban transportation contest, evaluates the practicality of the bicycle ridden by Alex Heisey and built by Grove City College students. (KS photo)
Urban transportation contest – The five competitors were scored on their time and ranking in the hill climb, ranking in the coast down, obstacle course time (a simple test of acceleration, maneuverability and braking) and points and ranking in the evaluation of the practicality of their vehicle. Points were awarded for lights (front and rear), fenders (front and rear), reflectors, daytime visibility, cargo carrying (minimal, one grocery bag or two), horn or bell, brakes, rearview mirrors, security against theft, convenience (getting on or in and off or out), weather protection, and carrying tools and tire pump or inflator and spare inner tube or tube repair kit.
For instance, the fastest of the five on the hill climb received 1 point; next, 2 points, etc. The rider scoring the most "practicality points" for lights, cargo carrying, etc., received 1 point; second most practicality points, 2; etc.
When the points for hill climb, coast down, obstacles course and practicality evaluation were added up, low score won. The result was a tie between Rick Toler on his upright bikes and Ron Thompson on his G4 front-wheel-drive recumbent, each with 9 points. Rick's bike had fewer practical features, but he did better in the performance categories; with Ron, it was the opposite. Third was Daryl Hanger, 10 points, on his Catrike 700; fourth was Denis Grelk, 14 points, on his homemade recumbent gravel bike, and fifth was Alex Heisey, 18 points, on the Grove City College student built bike. 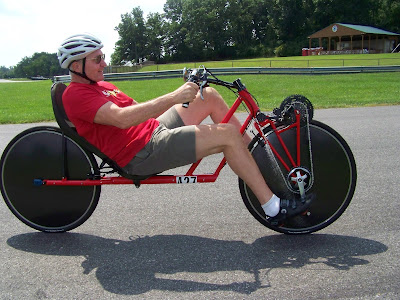 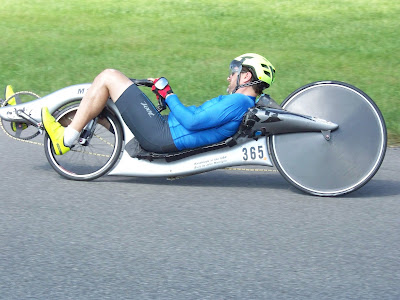 Mike Mowett of Detroit on his Morgiglio M1 finished 6th in the stock class, but he also was very busy organizing and running the rally, including compiling the results.  In the 200-foot sprint, he pedaled 40.45 mph, good for third place in the stock class. (ME photo)

We won't know the dates of the 38th annual Michigan HPV Rally in 2022 until early next year.
Car events get first priority at the Waterford Hills track and organizers of those events have until late this year to reserve the track for 2022. Then after those dates are known, track management gives us a pick of the few weekends that are still vacant.
Most Michigan HPV Rallies have been in May or June and likely, COVID permitting and if there's a weekend available then, we will return to conducting the rally during one of those months in 2022.
If anyone has thoughts about when to conduct the rally – for instance, is August better than May or June – add your thoughts here.